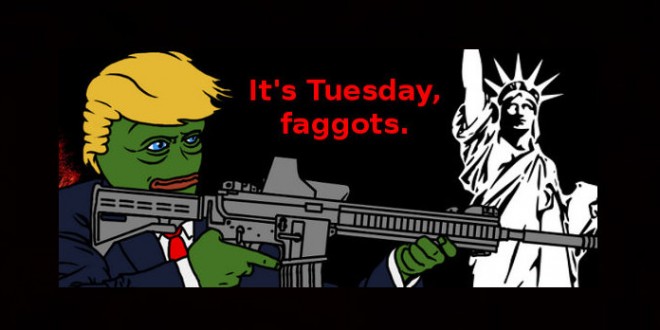 The Daily Stormer, a Neo-Nazi website, published a list of dozens of Twitter users who expressed sadness over the election outcome on Wednesday, urging its readers to target and harass them to the point of suicide.

The frontpage of the white supremacist website shows a large photo of President-elect Trump and his wife, Melania Trump, meeting with Speaker of the House Paul Ryan and Vice President-elect Mike Pence. “You should probably go ahead and be afraid now,” writes Andrew Anglin, the website’s publisher. The post suggests it’s readers “can troll these people and definitely get some of them to kill themselves.”

Several of the tweets embedded in the Daily Stormer post show fear over the fate of women, people of color and LGBT individuals in the U.S. under a Trump presidency. One person says they’re worried about possible nuclear war. A disclaimer on the page reads: “We here at the Daily Stormer are opposed to violence.”

Reports of hate-based violence against Hispanic people, Muslims and women continue to be documented around the country in the wake of Trump’s victory in the polls on Tuesday.

Trans Hotline, a nonprofit that focuses on suicide prevention for transgender people, has received at least five times the call volume it normally gets. And the Trevor Project, the nation’s only LGBT youth-focused suicide prevention hotline, received more calls, texts, and online chats on Wednesday than it’s gotten on a single day in four years, more than double its normal daily volume.

“We started getting increased call volume at about 10 p.m. on election night, and it hasn’t slowed down at all,” said Gretta Martela, director of Trans Hotline, on Thursday afternoon. “In fact, it’s on the rise still.” The hotline receives about 100 calls a day normally. In the 24 hours prior to speaking with Mother Jones, Martela said it had received 523 calls.

Previous Jane Sanders: Bernie Would Have Won [VIDEO]
Next Facebook Glitch Tells Users They Have Died