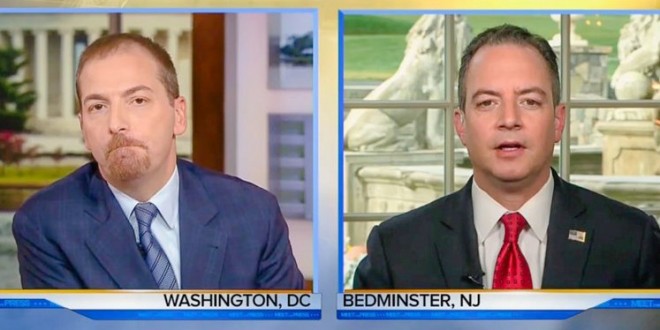 Priebus: We Won’t Have A Registry Based On Religion But I Won’t Rule Out A Muslim Registry [VIDEO]

Incoming White House Chief of Staff Reince Priebus said Sunday on NBC’s “Meet The Press” that President-elect Donald Trump’s team is not planning to create a Muslim registry, but would not rule anything out.

“Look I’m not going to rule out anything,” Priebus said. “We’re not going to have a registry based on a religion. But what I think what we’re trying to do is say that there are some people, certainly not all people… there are some people that are radicalized. And there are some people that have to be prevented from coming into this country. And Donald Trump’s position, President Trump’s position is consistent with bills in the House and the Senate that say the following: If you want to come from a place or an area around the world that harbors and trains terrorists, we have to temporarily suspend that operation until a better vetting system is put in place.”

Priebus further maintained that tougher screening was needed before the incoming administration could consider immigration. “When a better vetting system is put in place then those radical folks, they’ll not be allowed in, but then others will be allowed in, but only until that is done. That’s what Gen. Michael Flynn believes and that’s what President Trump believes.”

Previous Mike Pence Breaks With Petulant Boss: Hamilton Is A Really Great Show And I Wasn’t Offended [VIDEO]
Next REPORT: Melania Won’t Move To The White House So Son Can Continue Attending School In Manhattan