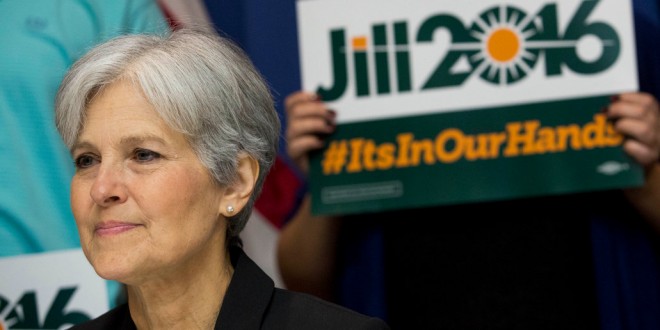 Green Party presidential candidate Jill Stein filed for a recount of votes Monday in Pennsylvania, one of three battleground states where President-elect Donald Trump won in his Electoral College victory.

A statement released on behalf of Stein circulated on Twitter Monday afternoon. The statement said recounts could begin in Pennsylvania and Wisconsin — another state where the candidate has filed — as soon as this week.

“Americans deserve a voting system we can trust,” Stein said in the statement, released by the public relations firm Berlin Rosen. “After a presidential election tarnished by the use of outdated and unreliable machines and accusations of irregularities and hacks, people of all political persuasions are asking if our election results are reliable.”

It continued: “We must recount the votes so we can build trust in our election system. We need to verify the vote in this and every election so that Americans of all parties can be sure we have a fair, secure and accurate voting system,” Stein wrote.

Last week, Stein launched an initiative to raise $7 million to fund the recount fees in Pennsylvania, Wisconsin and Michigan. As of Monday afternoon, Stein had raised more than $6.2 million, according to a tracker on her campaign website. Per the team’s statement, 137,000 supporters gave an average of $46 per donation.

Previous Ivanka Trump’s Shoe Factory Is Moving From China To Ethiopia Because Labor Costs There Are Much Cheaper
Next BANNED FOR LIFE: Delta Airlines Permanently Boots Trump Fan Who Screamed About “Hillary Bitches”