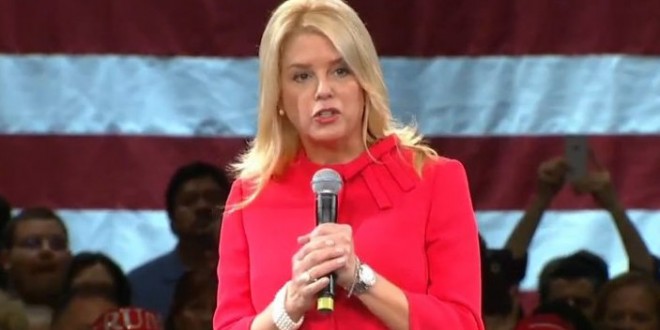 Pam Bondi: I’m Honored To Serve The Man I Refused To Prosecute After He Donated $25,000 To My Campaign

Florida Attorney General Pam Bondi, the only statewide elected Republican who endorsed Donald Trump before the state’s GOP primary, secured a spot Friday on the executive committee of the president-elect’s transition team.

“I’m honored to serve President-elect Donald J. Trump in making this historic transition and assisting in finding the best individuals to bring change to Washington on day one, grow our economy, protect our children and families, and be unafraid to stand up for Americans,” Bondi said in a statement to POLITICO Florida.

The path to becoming a Trump insider didn’t come without a toll for Bondi. She was excoriated by Trump’s critics for previously receiving a donation from him shortly before her office declined to bring a fraud case against Trump University. Bondi and Trump denied any wrongdoing, and no evidence surfaced to prove critics claims that there was a quid pro quo.

“Bondi is solid. She knows what she’s doing. And she’s loyal,” the source, unauthorized to speak for Trump, said on condition of anonymity, said. “Loyalty and service go a long way with Donald.”

Previous Evan Wolfson On Trump: Freedom To Marry Is The Law Of The Land And No One Is Taking That Away From Us
Next Corey Lewandowski Resigns From CNN And Hotfoots It Directly Over To Trump Tower To Collect His Reward