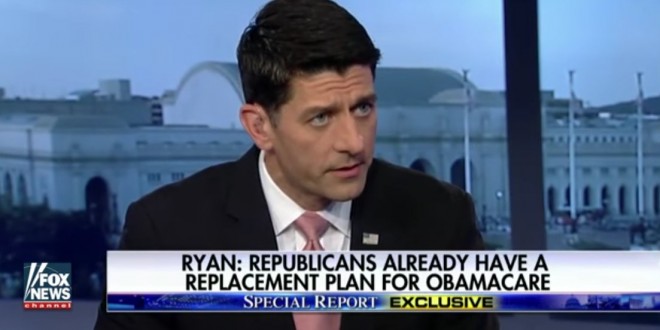 “Your solution has always been to put things together, including entitlement reform,” says Baier, using Republican code for privatizing Medicare. Ryan replies, “If you’re going to repeal and replace Obamacare, you have to address those issues as well. … Medicare has got some serious issues because of Obamacare. So those things are part of our plan to replace Obamacare.”

Ryan tells Baier, “Because of Obamacare, Medicare is going broke.” This is false. In fact, it’s the complete opposite of the truth. The Medicare trust fund has been extended 11 years as a result of the passage of Obamacare, whose cost reforms have helped bring health care inflation to historic lows. It is also untrue that repealing Obamacare requires changing traditional Medicare. But Ryan clearly believes he needs to make this claim in order to sell his plan, or probably even to convince fellow Republicans to support it.

In this case, it’s also worth appreciating why Ryan is so shamelessly trying to deceive the public.

Throughout the Obama era, Ryan has pushed a radical budget plan that would effectively eliminate the Medicare system, phasing it out of existence and replacing it with a voucher system. Seniors, under the Speaker’s vision, would stop receiving guaranteed care under a popular and effective government-run program, and would instead receive vouchers that would help pay for coverage through private insurers.

Ryan has been an enthusiastic proponent of such a scheme throughout his career – long before “Obamacare” became the law of the land. Now, however, the Wisconsin congressman seems to think he can use the ACA as an excuse to do what he’s wanted to do anyway for nearly a decade. In other words, Ryan’s message for years has been, “I want to privatize Medicare.” Now, his message has become, “It’s Obamacare’s fault that we have to privatize Medicare.”

But we don’t. The Speaker is plainly and demonstrably wrong. Repealing the Affordable Care Act wouldn’t help Medicare’s finances; it would do the exact opposite, pushing the Medicare system closer to insolvency. Telling the truth, however, wouldn’t help advance the plan Ryan has long advocated, so he’s using “Obamacare” as a convenient fig leaf.