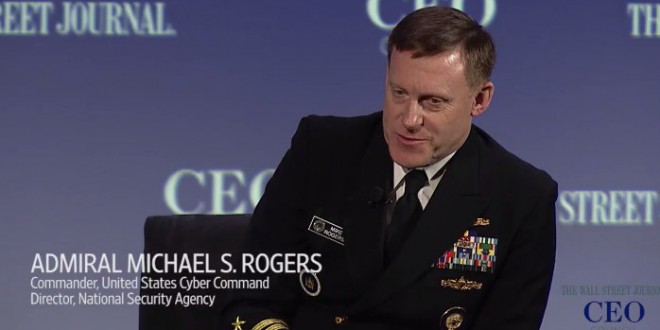 NSA Director Michael Rogers: Never Doubt That The Election Was Sabotaged By A Foreign Government

Adm. Michael Rogers, head of the National Security Agency and the U.S. Cyber Command, spoke at a Wall Street Journal forum on Tuesday, and much of the focus of his discussion with WSJ Deputy Editor-in-Chief Rebecca Blumenstein was about joining government and business to fight the scourge of cyber crime. The number of hackers is “so large and diverse” that it’s difficult to identify the perpetrators, he said, but roughly two-thirds of them are criminals looking to earn money from stealing personal information, and the remaining third are state-sponsored hackers.

But Blumenstein also asked Rogers about WikiLeaks, and the slow and steady leak of emails stolen from Hillary Clinton campaign chairman John Podesta’s gmail account. “There shouldn’t be any doubts in anybody’s mind: This was not something that was done casually, this was not something that was done by chance, this was not a target that was selected purely arbitrarily,” Rogers said. “This was a conscious effort by a nation state to attempt to achieve a specific effect.”

“A conscious effort by a nation-state to attempt to achieve a specific effect” NSA chief on WikiLeaks https://t.co/kvmrTyVE30 #WSJCEOCouncil pic.twitter.com/AT2pxK2ROR