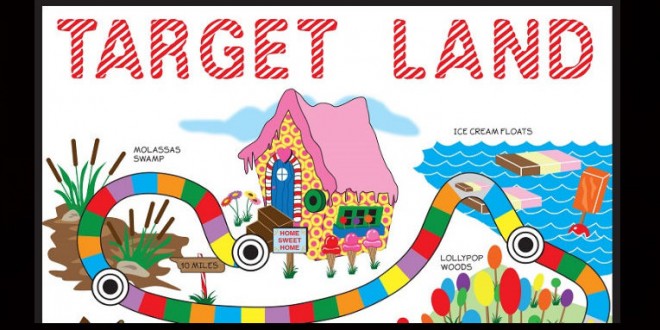 Leave it to the NRA to take a simple, sweet, innocent kid’s game and blow a hole right through it. The latest affront to American decency from the National Rifle Association (motto “Encouraging Kids to Fire High-Powered Handguns Since Even Before Columbine!”) comes in the form of “Target Land,” a version of the childhood board game “Candy Land” that could only come from the twisted, sick, deranged minds at the gun lobby.

It’s bad enough that the NRA re-wrote fairy tales earlier this year so that Little Red Riding Hood was packing heat, now they are after the toy chest. “Put a Twist on Your Favorite Board Games at the Range,” reads the headline on the NRA’s blog. What follows are images of old games — checkers, “Battleship” and “Candy Land” — altered to include bull’s-eyes. “Target Land” even puts the bull’s eye directly on a candy heart — the kind that say “Be mine” on them. There’s even one on the last space, next to the sign that says “Home Sweet Home.”