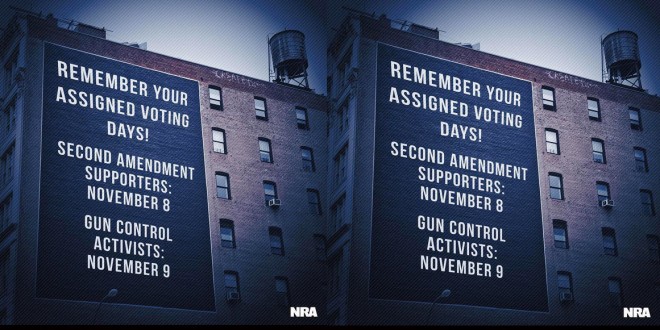 The National Rifle Association thinks gun rights supporters and gun control advocates should vote on different days. The NRA posted a photo on its Instagram page showing two election dates. The picture shows the side of a building with a sign that says, “Remember your assigned voting days! Second Amendment supporters: Nov. 8. Gun control activists: Nov. 9.”

The sign is a take on a popular election meme. Election Day for all voters is Nov. 8. The NRA has actively supported Donald Trump this election, buying ads and spending more than it ever has on an election. Ironically, earlier in the campaign Trump gave the wrong date of the election during a rally. He told supporters, “Go and register. Make sure you get out and vote Nov. 28.”

Vote like your freedoms depend on it. Vote freedom first! #NRA #DefendtheSecond #2A #guns

A photo posted by The official NRA Instagram (@nationalrifleassociation) on Nov 4, 2016 at 10:31am PDT