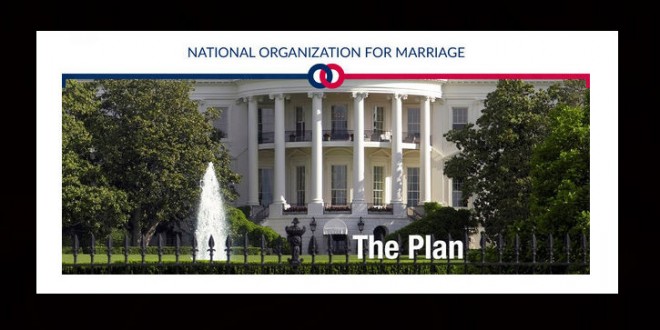 And pretty much every other LGBT advance achieved by the Obama administration. From hate group leader Brian Brown:

Donald Trump has won a historic election, an unprecedented victory that has turned the establishment upside down. We heartily congratulate him and his team on their incredible win. President-elect Trump will now turn his attention to governing, and NOM is committed to working with him. We are confident that our voice and our views will be important in a Trump administration.

Here is our plan:

We will work with President Trump to nominate conservative justices to the U.S. Supreme Court, individuals who will adhere to the words and meaning of the constitution. Such justices will inevitably reverse the anti-constitutional ruling of the Supreme Court imposing same-sex ‘marriage’ on the nation in the Obergefell decision, because that decision lacked any basis in the constitution.

We will work with President Trump to rescind the illegal, over-reaching executive orders and directives issued by President Obama, including his dangerous “gender identity” directives, attempting to redefine gender just as he sought to redefine marriage.

We will work with President Trump to reverse policies of the Obama administration that seek to coerce other countries into accepting same-sex ‘marriage’ as a condition of receiving US assistance and aid. It is fundamentally wrong for a president to become a lobbyist for the LGBT agenda, and we are confident that will end in the Trump administration.

We will work with President Trump and Congress to pass the First Amendment Defense Act (FADA), which Mr. Trump supports. FADA is critical legislation to protect people who believe in marriage from being targeted by the government for persecution.

This is a bright and exciting time for NOM, and we are committed to taking full advantage of the opportunity we have. Our voice and our views matter to the incoming administration, and that means your voice and views matter.

To make sure that we can influence the policy debates that are coming, we need to step-up our communications. The first step is to grow our presence on social media. Please act today to follow NOM and me on Twitter, and to like us on Facebook.

We’re excited about the future, and we are looking forward to work with the Trump administration to restore marriage, uphold gender, protect religious liberty and promote families.

NOM remains the sole national hate group to support the First Amendment Defense Act. The Family Research Council, the Liberty Counsel, and the American Family Association all withdrew their support after new language was added which would also legalize discriminating against married straight couples on the the basis of “sincerely held religious belief or moral conviction.”