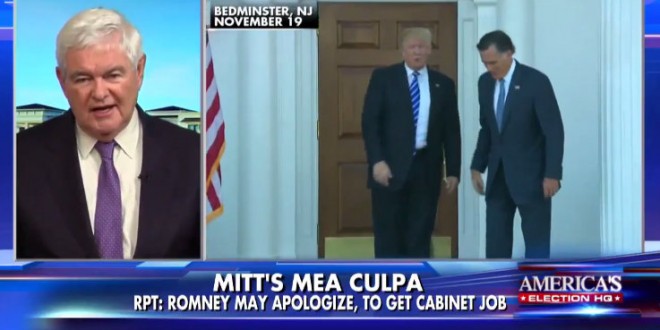 Newt Gingrich: Trump Supporters Will Be “Enormously Disappointed” If Romney Gets Any Kind Of Job [VIDEO]

Donald Trump’s supporters would be “enormously disappointed” if the president-elect nominates Mitt Romney to be secretary of State, Newt Gingrich said Sunday. Romney is reportedly at the top of the list to be the nation’s top diplomat in the new administration, but he was highly critical of Trump’s campaign, once calling him a “fraud” and a “con man.”

“I think there’s nothing Mitt Romney can say that doesn’t sound phony and frankly, pathetic,” Gingrich said on Fox News. “He called Trump vicious and vile things… And the idea that now that Trump has won that Mitt Romney would suddenly decide to issue a mea culpa and say, ‘Oh, gee, all the vicious things I said about you when you were running I didn’t really mean.'”

Gingrich continued: “He sure did mean them, and he sure did try to defeat Donald Trump. I think speaking for most of the Trump supporters, while we support President-elect Trump in whatever he does, I think we would be enormously disappointed if he brought Mitt into any position of authority.”

.@newtgingrich: “I think we would be enormously disappointed if [@realDonaldTrump] brought @MittRomney into any position of authority.” pic.twitter.com/8ETXXpGU6Y