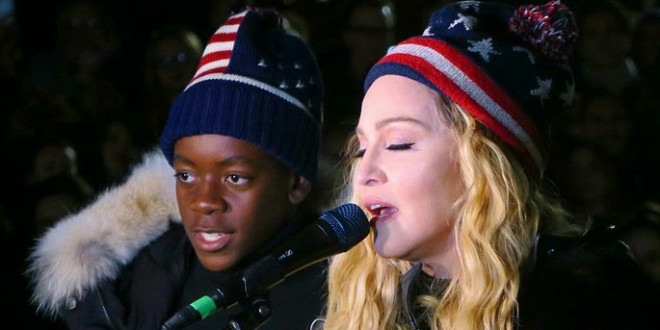 Madonna gave New Yorkers the surprise of a lifetime when she serenaded the crowd at Washington Square Park on Monday night (Nov. 7) with a special acoustic performance in support of Hillary Clinton.

She stood in the center of Washington Square Fountain surrounded by a group comprised mostly of NYU students and cheered as she performed covers of John Lennon’s “Imagine” and Peter, Paul and Mary’s “If I Had A Hammer,” as well as her own songs “Rebel Heart” and “Like A Prayer.”

I included several snippet videos from Twitter for their various angles. The full concert is at the bottom from an attendee’s Facebook stream.

Tonight I sang “Imagine” with Madonna in Washington Square Park for Hillary Clinton. My coffin is beautiful. pic.twitter.com/2DTKpUdieZ

Madonna performed one of her #1 single “Like a Prayer” in support of Hillary at Washington Square Park tonight. 👸🏼👑🙏🏻pic.twitter.com/24wcZyxJ5V — Madonna Fresh News (@MadonnaDailyID) November 8, 2016

God is real, and she’s either Madonna or Hillary Clinton. pic.twitter.com/3FgqmORaA0