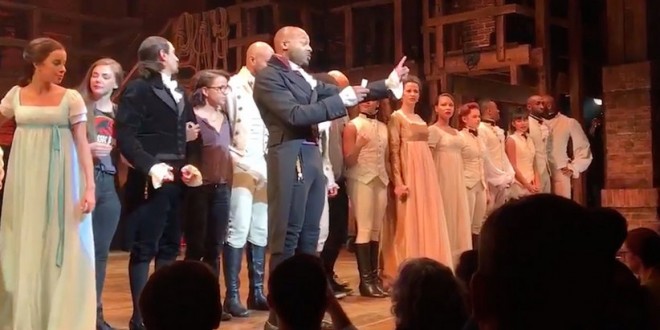 History is happening in Manhattan: “Hamilton” has set a record for the most money ever made in a single week by a Broadway show. The musical, which attracted national attention just before the week began with criticism from President-elect Donald J. Trump of its quality and the manners of its cast, grossed $3.3 million last week. That’s a huge number on Broadway, where only a handful of unusually strong shows gross more than $1 million in a week, and most pull in far less.

“Hamilton,” which won the Tony Award this year for best new musical, is now the first Broadway show ever to gross more than $3 million for an eight-performance week. In 2013, “Wicked” grossed $3.2 million during a week in which that show had nine performances, one more than usual.

The show, which uses hip-hop music and a diverse cast to explore the life and death of Alexander Hamilton, also set a record for the highest premium ticket price ever charged by a Broadway box office — $998 — although some people have paid more buying tickets from resellers. The previous premium ticket price record was $700, for “Barry Manilow on Broadway” in 2013.

It is not clear how many seats “Hamilton” sold for a $998 box office price, but the show’s high average paid admission last week — $303, which is also a Broadway record — suggests that a substantial number of seats were sold for a premium ( these are the official box office prices — many people pay more buying tickets from resellers).

Previous Trump Taps Leading Obamacare Critic To Run HHS
Next Jill Stein On Recount: I’ve Got No Skin In The Game