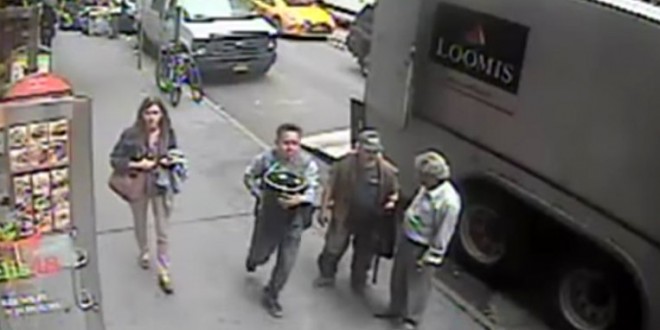 The search continues for a suspect who police said was seen on surveillance video stealing a bucket of gold flakes off an armored truck in Midtown Manhattan. It happened around 4:30 p.m. back on Sept. 29 as the armored truck was parked on West 48th Street between Fifth and Sixth avenues.

Police said the man is seen on surveillance video scoping out the truck, that had its back door open. He then grabs an 86-pound, unmarked and sealed black metal bucket containing $1.6 million-worth of gold flakes, police said.

He lugged the bucket up the street, heading east on West 438th Street toward Third Avenue, making his way through the crowds of people who didn’t notice him carrying the five-gallon pail, police said.

At one point, the heavy weight of the bucket catches up with him as he’s seen stopping, putting it down and eventually picking it back up again. He then gets into a white Ford sedan. Police said the man’s entire trip, usually considered to be about a 10-minute walk, took an hour.

Hey, we know of a certain midtown penthouse that can always use a shitload of gold flakes.