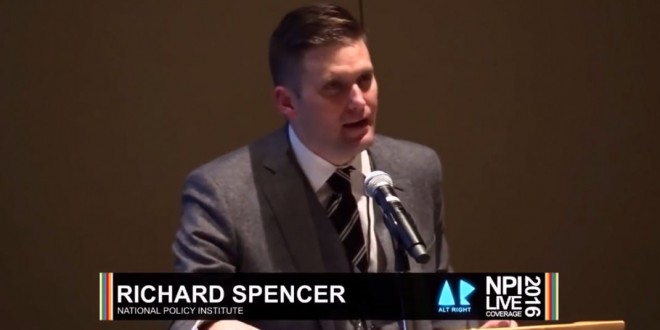 By the time Richard B. Spencer, the leading ideologue of the alt-right movement and the final speaker of the night, rose to address a gathering of his followers on Saturday, the crowd was restless.

In 11 hours of speeches and panel discussions in a federal building named after Ronald Reagan a few blocks from the White House, a succession of speakers had laid out a harsh vision for the future, but had denounced violence and said that Hispanic citizens and black Americans had nothing to fear. Earlier in the day, Mr. Spencer himself had urged the group to start acting less like an underground organization and more like the establishment.

But now his tone changed as he began to tell the audience of more than 200 people, mostly young men, what they had been waiting to hear. He railed against Jews and, with a smile, quoted Nazi propaganda in the original German. America, he said, belonged to white people, whom he called the “children of the sun,” a race of conquerors and creators who had been marginalized but now, in the era of President-elect Donald J. Trump, were “awakening to their own identity.”

As he finished, several audience members had their arms outstretched in a Nazi salute. When Mr. Spencer, or perhaps another person standing near him at the front of the room — it was not clear who — shouted, “Heil the people! Heil victory,” the room shouted it back.

These are exultant times for the alt-right movement, which was little known until this year, when it embraced Mr. Trump’s campaign and he appeared to embrace it back. He chose as his campaign chairman Stephen K. Bannon, the media executive who ran the alt-right’s most prominent platform, Breitbart News, and then named him as a senior adviser and chief strategist. Now the movement’s leaders hope to have, if not a seat at the table, at least the ear of the Trump White House.

How much clearer can it get? Stop normalizing this man. Stop calling him a hardcore conservative. He’s much, much worse than that. He is being openly celebrated and adored by hate groups because they see him as one of them. They seem him as one of them because he is. Steve Bannon is a bigot. He has created a home for bigots and anti-Semites. His own boss complimented him by comparing him to a Nazi propagandist.

All of this comes as New York City experienced a staggering 31% increase in hate crimes in our city. Of course our police chief does not want to say, “Donald Trump caused this,” but such a steep increase in hate comes from somewhere. Donald Trump and Steve Bannon are empowering and emboldening these elements in our country. With every day that passes, our nation grows deeper in shame for who and what it has allowed to get this far. Mind you, all of this was known and widely shared about Steve Bannon before the election.

We live in a time where a man who empowers Neo-Nazis will be crafting policies and strategies in the highest, most important office in the land. This is not a joke. This is not an exaggeration. This is America. 2016.