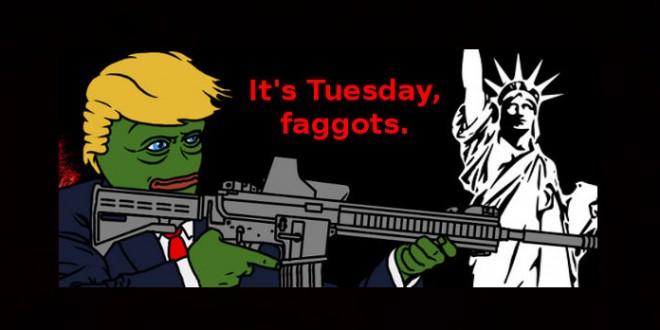 Nazi Site Celebrates Their Glorious Leader: We Did This And Now We’re Going To Kick Those Monkeys Out

From Andrew Anglin, editor of The Daily Stormer:

We won, brothers. All of our work. It has paid off. Our Glorious Leader has ascended to God Emperor. Make no mistake about it: we did this. If it were not for us, it wouldn’t have been possible.

We flooded the tubes, we created the energy, we made this happen. We were with him every step of the way. And the great news is, we’re going to be given credit for it. The media is finished. They are going to lash out. They will implode completely. History has been made.

Today, the world ended. A new world has been born. Anything is possible now. The future is wide open. Trump is a step toward our goal, not our actual goal, but he is a gigantic step.

All my friends in Europe are texting me “NOW WE’RE GOING TO GET TO KICK OUT THESE MONKEYS!!!!” Seriously, all caps texts, just like that.

We will now move into the next phase of our Great Work. Tomorrow, we troll. We have won so much. And it has led to the ultimate win. The battle is far from over. Much, much, much work to be done.

But the White race is back in the game. And if we’re playing, no one can beat us. The winning is not going to stop. Thank you all. I love you all. I am humbled to have had the honor of narrating this epic story for all of you amazing people. We won, brothers. Hail victory.

They too were trying to make their country “great” again.