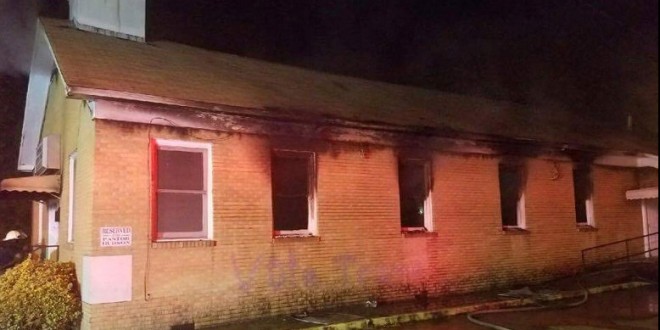 A black church in Greenville, Mississippi, was set on fire on Tuesday night. Fire fighters arrived to find Hopewell Missionary Baptist Church “heavily engulfed in flames,” Mayor Errick Simmons said in an interview; the fire took nearly an hour to contain. No one was in the church at the time, and no one was injured. On the side of the church, beneath the blackened windows and roof, the words “Vote Trump” have been spray painted.

The fire is being investigated as a hate crime, Simmons said. Federal authorities, including the FBI and the Bureau of Alcohol, Tobacco, and Firearms and Explosives, are helping local authorities with the investigation, which is part of the standard procedure for church fires.

“We’re very cautious in this climate, in this day and time, to make sure we’re very deliberate in investigating matters like this,” Simmons said. This fire was “a direct assault on people’s right to free worship,” he said, and later added during a press conference, “I see this as an attack on the black church and the black community.”

Previous IOWA: Suspect In Killing Of Two Cops Had Recently Been Ejected From Football Game Where He Protested Against National Anthem “Sitters” By Waving The Confederate Flag At Black Attendees [VIDEO]
Next Michele Bachmann: Jesus Told The FBI Where To Find Those Emails Because Everybody Prayed [AUDIO]