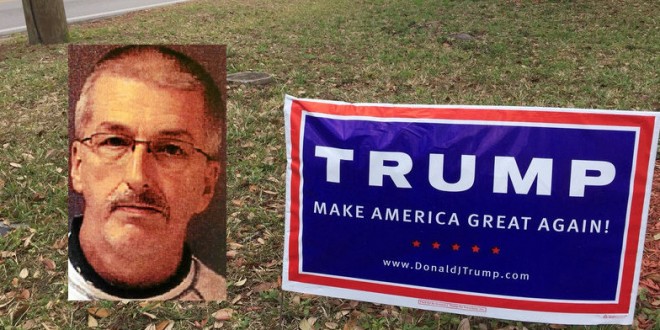 MICHIGAN: Trump Fan Charged With Seven Felonies For Holding Children At Gunpoint Over His Yard Sign

A 56-year-old Allen Park man has been charged with seven felonies after he allegedly pointed a gun at six children he accused of destroying his Donald Trump lawn sign. Michael Robert Kubek was arraigned Nov. 1 before 24th District Judge John Courtright. He was charged with six counts of assault with a dangerous weapon and one count of felony firearm.

Shortly after 8 p.m. Oct. 29, Kubek called police to report a group of teens had hit his Trump for president lawn sign, then took off running on Sterling, toward Moore Avenue. Upon arrival, an officer was unable to find Kubek at his Sterling Avenue house, but the officer heard what was described as a lot of yelling at the corner of Pennsylvania and Sterling.

Police found six children, ranging in age from 12 to 14, sitting on the grass with Kubek yelling and cursing at them. He told the officer he was highly upset because he believed the kids destroyed his Trump sign. The juveniles told police Kubek accused them of damaging his sign, then he pulled out a pistol and pointed it at them. He then told them to sit down on the grass.

The kids said they tried to tell Kubek they did not damage his sign, but it only resulted with Kubek telling them to shut up and continue cursing at them. They said Kubek held them at gunpoint while his mother called police. According to police, Kubek’s mother lives on the same block. The officer said he talked with each kid individually and they all confirmed that Kubek pointed a gun at them. Each of them also gave written statements of their account of the incident.

Kubek admits that he has no evidence that the children touched his sign. His first court appearance is scheduled for early December.