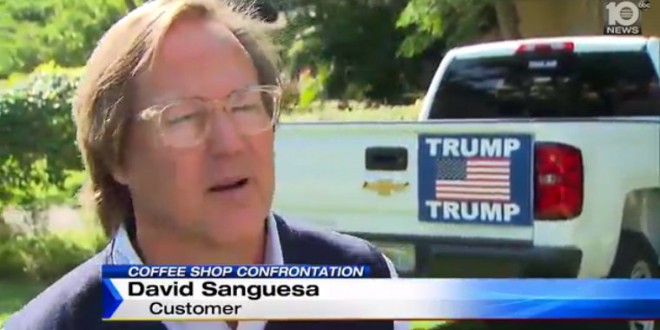 You’ll be shocked to learn that this guy has a lengthy criminal record. Miami’s ABC affiliate reports:

A video has gone viral of a man at a Starbucks in Coral Gables who proclaimed that he voted for Donald Trump, then accused a barista of discriminating “against whites.” “You’re trash,” David Sanguesa said to a barista after demanding his money back. “Because I voted for Trump. Trump. You lost. Now give me my money back.”

Word of the incident went viral because of a Twitter post that said that a “#trumpsupporter” attacked and threatened patrons and staff at the Starbucks because his coffee took too long and blamed anti-white discrimination.

Sanguesa said the broker with whom he was meeting believed it had to do with the Trump sign on his truck. “I apologized,” Sanguesa said. “I did apologize to them.” Still, Sanguesa said it was “completely discrimination and, to me, racism because of our support for Donald Trump.”

The barista, who returned to work Thursday, said Sanguesa’s claims are blatant lies. “He must have been having a bad day,” Jennifer Santos said. “I felt disrespected. Very disrespected. It was very insulting and very discriminating. Things happen.”

Sanguesa, who said he suffers from mental illness and did not take his medication the day of the incident, said he received a call from Starbucks’ corporate office. Records show that Sanguesa was previously arrested multiple times in South Florida, including on a battery charge in 2014 in Miami-Dade County.

You can see watch the full confrontation in my post from yesterday.

The Miami Herald on Thursday published excerpts of grammatically challenged and harshly worded emails that Sanguesa had sent to the daily newspaper. In the rough emails, the impatient coffee drinker repeatedly ripped into Obama, women and homosexuals.

Ninety-five million people have lost their jobs, he falsely claimed in one email, because of Obama’s “sick, left wing agenda of not working… living off the government…trying to get rid of Jesus Christ, abortion. Homosexuality, lesbians, transgender….we are Miami destroyed…by people who hate the USA.”