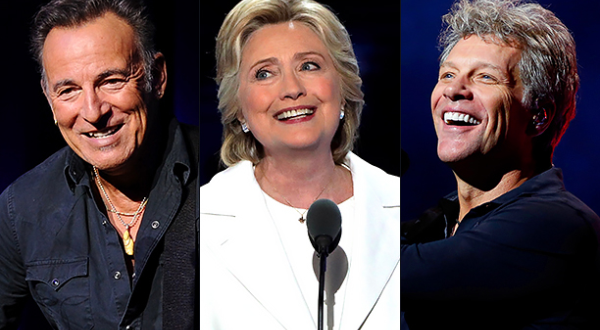 The rally begins at 7PM and the line to get in is over 1.5 miles long at this writing. I’m posting this a bit early as a heads-up. Via NBC News:

Springsteen will perform alongside Bon Jovi and urge Pennsylvanians, one of the largest groups of Clinton supporters, to turn out for Clinton on Tuesday. Springsteen has been vocal about his endorsement of Clinton, but he told Rolling Stones in September that he wasn’t sure whether he wanted to rally for her.

Springsteen campaigned in a similar pattern for Obama in 2012, performing in Obama’s final rally in Wisconsin, but he hasn’t performed for other former Democratic candidates.

Clinton is expected to make her closing argument Monday, asking voters to help her make history as the first female president to continue America’s legacy. Obama and Clinton will also talk about Donald Trump’s “dangerous vision.”