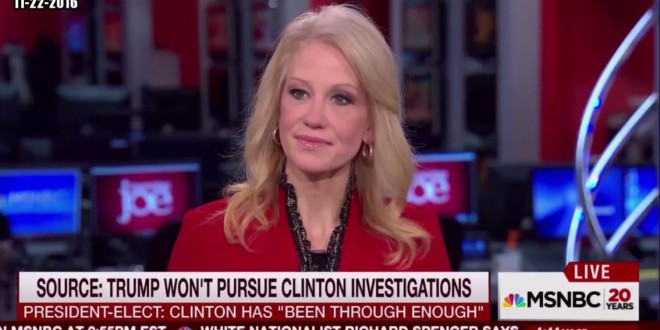 President-elect Donald Trump will not follow through on his campaign pledge to pursue an investigation into Hillary Clinton, one of his aides told MSNBC’s “Morning Joe.”

“I think when the President-elect, who’s also the head of your party, tells you before he’s even inaugurated that he doesn’t wish to pursue these charges, it sends a very strong message, tone, and content” to other Republicans, former Trump campaign manager Kellyanne Conway said Tuesday.

“If Donald Trump can help her heal, then perhaps that’s a good thing to do,” Conway added, saying Clinton “still has to face the fact that a majority of Americans don’t find her to be honest or trustworthy.”

“I think he’s thinking of many different things as he prepares to become the president of the United States, and things that sound like the campaign are not among them.”

Previous US Holocaust Memorial Condemns Pro-Trump Nazi Meeting: The Holocaust Began With Words, Not Killing
Next One Million Moms Calls On Supporters To Harass Zales Managers Over Same-Sex Wedding Commercial