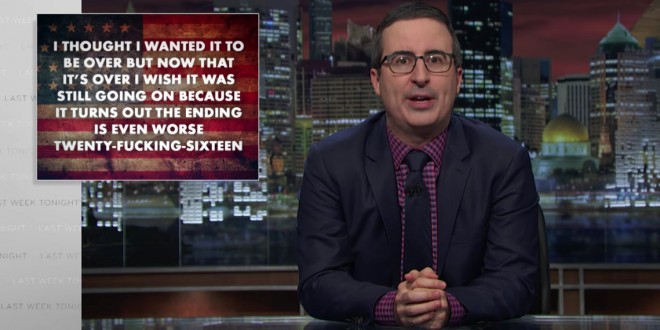 John Oliver: Trump Is Like A Magic 8 Ball, Every Time You Shake Him You Get A Different Answer [VIDEO]

Oliver ticked off some of his campaign vows, calling it “the To Do list on Satan’s refrigerator.” “Some argue he might not have meant all those things,” the late night host said. “That leaves us with two bad options: Either we just elected a president who didn’t mean a single word he said, or we elected one who did.”

Problem is, it’s impossible to know which one is true, Oliver said, citing Trump’s 60 Minutes interview that had run earlier same evening, in which he walked back several of his campaign promises that had played well with his supporters. Among them, his vow to kill Obamacare, and to appoint a special prosecutor to investigate Hillary Clinton with a view toward tossing her into the hoosegow.

“Don’t get complacent…He might change his mind on that again,” Oliver cautioned “Trump is like a Magic 8 Ball; every time you shake him gives you a different answer. Trump’s election begs the question how the media, which is “supposed to catch a serial liar, failed,” Oliver said.