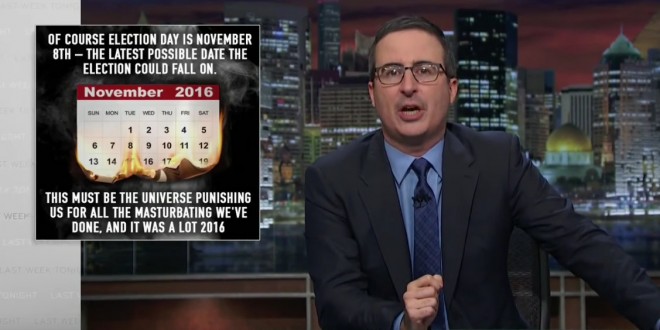 It is frankly hard to believe there ever was a time when people thought a Trump candidacy would be funny, Oliver acknowledged. “But there was such a time,” he confessed, “Because, as you may remember, three years ago I guest-hosted The Daily Show.

Cue up The Daily Show video of Trump saying he would consider a White House run in 2016 and Daily Show guest-host Oliver snarking back: “Do it! Do it! Look at me! Do it! I will personally write you a campaign check now, on behalf of this country, which does not want you to be president but which badly wants you to run.” Oliver’s Last Week Tonight crowd groaned as, no doubt, did viewers at home.

“I want to believe America will reject Donald Trump, that our innate sense of decency will kick in, like some sort of moral autopilot. But I have been spectacularly wrong before,” he admits, noting that eight years ago, while still a correspondent on The Daily Show, he insisted the Chicago Cubs would never ever win the World Series.