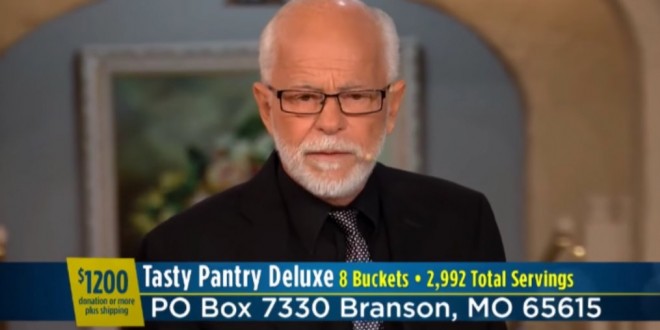 White Jesus is going to kill the fuck out of anybody who opposed “the will of God” by voting for Hillary. Right Wing Watch reports:

Televangelist Jim Bakker reacted to the presidential election results by prophesying that God will punish people who live in counties that voted for Hillary Clinton. Bakker pointed to a map that showed the results of the election by county and said that “if you live in the blue—any spot that’s blue—I would say, ‘Oh God, help me. Oh God forgive me.’ Because those are the ones who came against the will of God in this election.”

“I just want to tell you, God has spoken to me, I’ve seen under the ground in California, in LA, and God spoke to me that in Los Angeles alone there is going to be such an earthquake come that literally the big buildings will be laying on their sides, all of LA is going to collapse,” he added.

Bakker’s cohost Zach Drew agreed, warning that counties that voted for Clinton will receive God’s judgment: “If you look at California, the east side of California is red by county and the west side is blue. And where do all of the fault lines, where do all the prophetic words happen to plant themselves? It’s on the far-west of the West Coast. It’s the blue. Now you got to understand, judgment is not coming for them because they voted for Hillary Clinton, it’s because they voted for a platform. They voted for a platform that is so incredibly pro-abortion, anti-Bible.”