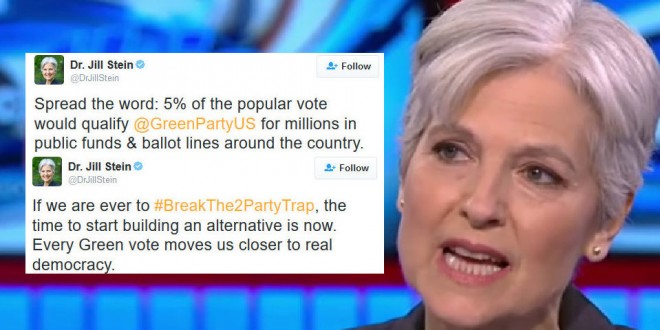 “Just 5 percent of the national vote for the Green Party Stein/Baraka ticket can be a true game-changer for American politics. It will qualify the Green Party for recognition as an official national party, and for federal funding in the 2020 presidential race proportional to the amount of votes received — at least $8 million to $10 million. It would also secure ballot access in a number of states that automatically grant ballot status if the presidential candidate receives anywhere from 1 percent to 5 percent of the vote (varying by state). It means the party can leap over the undemocratic barriers to ballot access for independent parties in many states, and help us lay the groundwork for a truly competitive challenge to the two-party system and the corporate rule it perpetuates.

“Our grassroots, people-powered campaign has achieved incredible gains in this election cycle, despite having had a fraction of the media coverage and an even smaller fraction of the vast resources of the two major parties. With the material benefits that come with 5 percent of the popular vote, we will have unprecedented resources to continue building this movement for progressive change, shoring up power from below, and paving the way for a new, sorely needed politics of integrity and transformation.

“Casting a ballot for the lesser evil in a corrupt and failing two-party system — which only promises more of the same — is the very definition of a wasted vote. In contrast, every vote for Stein/Baraka and the Green Party is a true investment in the future. A majority of Americans are disgusted with the political farce we are enduring. They are desperate for a principled alternative to the predatory bipartisan establishment, and seek a positive path out of the two-party trap. Investing your vote in a 5-percent victory for the Green Party can make it happen.” – Jill Stein, via press release.