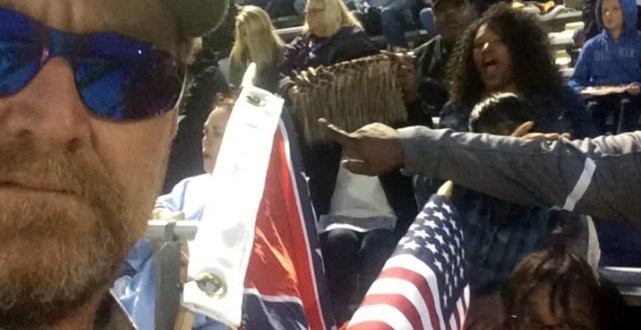 IOWA: Suspect In Killing Of Two Cops Had Recently Been Ejected From Football Game Where He Protested Against National Anthem “Sitters” By Waving The Confederate Flag At Black Attendees [VIDEO]

Authorities are investigating whether the suspect in Wednesday’s killings of police officers is tied to a man’s removal from Urbandale High School’s football stadium on Oct. 14 after the man claimed his Confederate flag was stolen by other spectators, police and school district officials said. The stadium is at the intersection where one of officers was found dead early Wednesday.

Authorities have identified Scott Michael Greene, 46, of Urbandale as a suspect in the deaths of an Urbandale police officer and a Des Moines police officer in what were described as ambush-style attacks. Greene was taken into custody in Dallas County on Wednesday morning. YouTube videos from a person calling himself Scott Greene shows a confrontation between him and Urbandale police officers outside Frerichs Field at 7111 Aurora Ave. in Urbandale last month. One 10-minute video, titled “Police Abuse, Civil Rights Violation at Urbandale High School 10/14/16,” was uploaded Oct. 16.

In the video, Greene is seen confronting officers, questioning why he is being asked to leave the school’s property. A different 10-second video by Greene, uploaded Oct. 21, shows an image of himself with Confederate and U.S. flags. In the first video, officers remove Greene from the property, while he questions why he is being asked to leave. He is later told by officers that holding the Confederate flag is in violation of a code with the Urbandale school district.

In a comment posted online with the YouTube video, someone calling himself Scott Greene says, “I was offended by the blacks sitting through our anthem. Thousands more whites fought and died for their freedom. However this is not about the Armed forces, they are cop haters.”