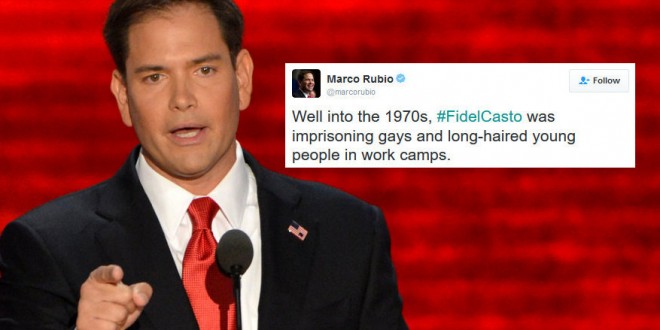 This afternoon Sen. Marco Rubio decided that it wouldn’t be hypocritical in the least to point out Fidel Castro’s history of oppressing gays. Has he somehow forgotten his own lengthy track record of opposing LGBT rights?

We sure haven’t forgotten his vote against ENDA, his support for DOMA, his fundraising for ex-gay torture advocates, his robocalls for NOM, his promise to undo Obergefell, and his sponsorship of the so-called First Amendment Defense Act, which would legalize anti-LGBT discrimination nationwide.

And we certainly haven’t forgotten his promise to withdraw his own immigration reform bill if it were be applied to same-sex couples or his declaration that gay adoption is a “social experiment” that “shouldn’t be forced on children.”

We have also not forgotten that Rubio outright lied about his own family’s history with Fidel Castro, claiming that they fled Cuba after the revolution when in fact they were living comfortably in Miami years before Castro seized power.

At least Fidel Castro eventually expressed regret for his treatment of Cuba’s gays, telling the press in 2010 that he took the blame for the “great injustices” suffered by his nation’s gay community. We won’t hold our breath for Marco Rubio to have a similar epiphany.

Previous Clinton Campaign To Join Jill Stein’s Recount Effort
Next Trump: Jill Stein’s “Ridiculous Recount” Is Just A Scam For The Green Party To “Fill Their Coffers With Money”