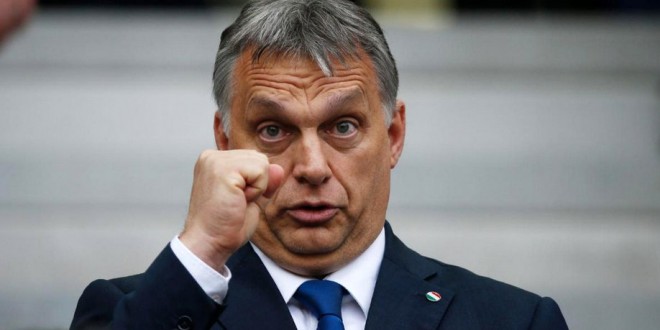 Orban said in July that Trump’s plans on migration and foreign policy were “vital” for Hungary, whereas those of rival Democrat Hillary Clinton were “deadly”. Orban was then the first European head of state to express a clear preference for either of the two candidates.

Orban has in the past upset fellow members of the European Union over policy, most recently with his tough stance on Europe’s migrant crisis, objecting to EU resettlement plans and having a fence built along Hungary’s southern border.

Trump dreams of building a wall to keep migrants out. But Orban, 52, has actually done it — erecting 109 miles of razor wire to stop them. Authorities in Hungary, a key transit nation for ­asylum-seekers aiming for generous European nations offering shelter, including Germany and Sweden, have been preventing them from moving on and shuttling them to camps, in part to dissuade more from coming.

Calling the mostly Muslim refugees a threat to Europe’s “Christian roots,” Orban has given voice to the fears of other European conservatives too shy to say such things aloud themselves. It is just another day for a man known by his critics as the Viktator — an authoritarian nationalist who has menaced his enemies and enraptured supporters with a polarizing panache. A right-wing firebrand who once tried to tax the Internet and whose government has launched a high-profile assault on nonprofit organizations, Orban, like Trump, has rarely shied away from a fight.

RELATED: Upon his reelection in 2010, Orban’s party instituted a constitutional ban on same-sex marriage in reaction to domestic partnerships having been legalized the previous year. Same-sex couples are also banned from adopting.