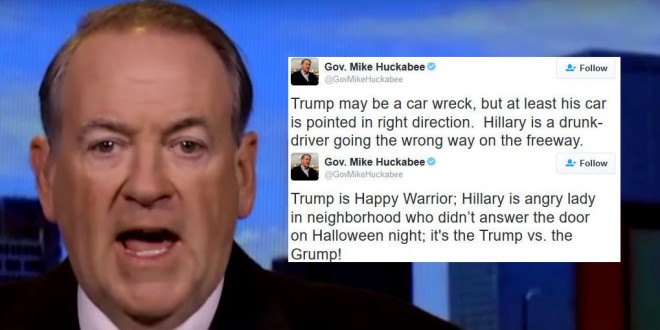 Huckabee: Trump May Be A Car Wreck But Hillary Is A Drunk Driver Going The Wrong Way On The Freeway

A car wreck vs. a drunk, wrong-way driver: That’s Mike Huckabee’s take on the election just days before final votes are cast. The never-shy former Arkansas governor and Donald Trump supporter tweeted Friday a message ultimately in favor of Trump, but with a non-favorable description of him and his opponent.

While the former candidate and current Fox News contributor didn’t jump onboard with Trump right after he ended his own campaign, he has been a critic of Republicans who have hesitated to back Trump. The loquacious Huckabee did not immediately tweet any more explanation of his assessment, nor was it clear what provoked it.