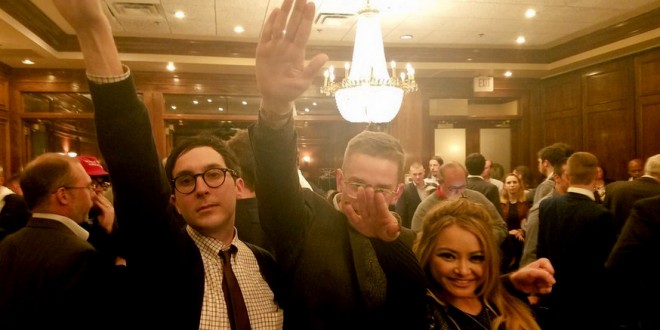 As protesters violently brawled with open Nazis outside today’s white supremacist event in Washington DC, lesbian reality star Tila Tequila was inside merrily giving the Nazi salute for the cameras.

Tequila (real name Thien Thanh Thi Nguyen), a Vietnamese immigrant, is infamously anti-Semitic and has written blog articles and social media posts with titles such as “Why I Sympathize With Hitler.” In 2013 she was banned from Facebook after posted a photo of herself in a Nazi uniform and standing in front of a photo of Auschwitz.

Partially visible in the above photo and wearing a Trump hat is notorious internet troll Chuck C. “Rage Furby” Johnson, who was banned from Twitter for publishing the names and home addresses of rape victims. Johnson is currently back on Twitter by using the handle “WeSearchr,” a company he founded expressly to offer bounties so that he can dox other victims.