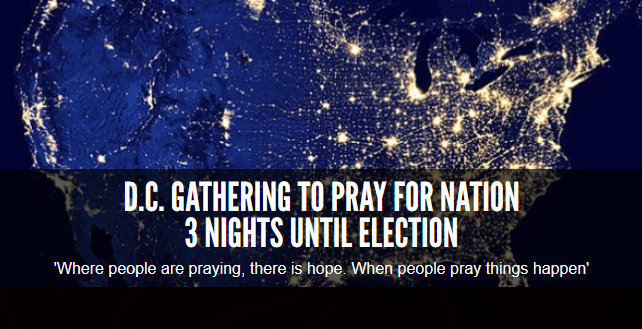 This event is separate from the “100,000-strong global prayer strike force” and the various pre-election fasting events to be held to convince White Jesus to stop Hillary. Via World Net Daily:

What advice would George Washington have for voters in 2016? “Pray,” he would probably say. Not just because the bombastic presidential campaign of 2016 has been so unlike any other in U.S. history, and may well prove to be one of the most consequential.

But also because the nation’s first president didn’t just truly believe in the power of prayer. He believed prayer was indispensable to the welfare of the republic. Many Americans still feel that way. That’s why some the nation’s most well-known Christian churches and organizations have organized a non-partisan three-night prayer rally on Capitol Hill, culminating on the evening the ballots are counted, when the nation will find out if the next president will be Hillary Clinton or Donald Trump.

The gathering for concerned citizens to pray for the election and the nation’s future will be held on Nov. 6, 7 and 8, at the Upper Senate Park. That park is just across the street from the north side of the Capitol, on Constitution Avenue, at New Jersey Avenue. The prayer rally on Sunday, Nov. 6, will begin at 6 p.m. Eastern. Prayers on Monday and Tuesday, Nov. 7 and 8, will begin at 7 p.m. Eastern. Individuals and church groups are invited to attend.

Leading the three-night prayer vigil will be hosts pastor Dan and JoAnn Cummins of the Jefferson Gathering Worship Services, as well as leaders from well-known Christian churches and organizations. Those include the Skyline Wesleyan Church in San Diego, Triumph Church of D.C., Concerned Women for America, Family Research Council, Congressional Prayer Caucus Foundation, Somebody Cares International of Houston, Texas, Faith & Action in the Nation’s Capital, and Hombres De Parabra (Men of Their Word) of Washington, D.C.