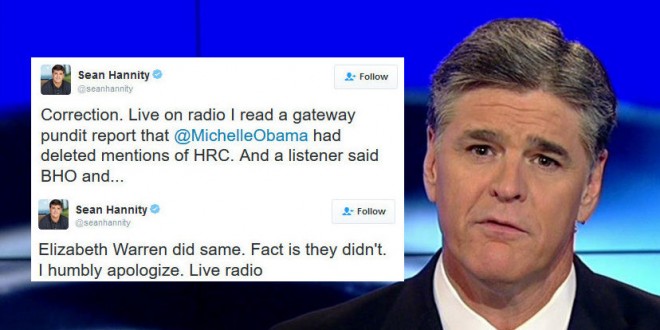 Fox News commentator Sean Hannity has been engaging in false information sharing as of recently, but on Tuesday he apologized after spreading a fake rumor on his radio show about the Obamas and Sen. Elizabeth Warren.

Hannity suggested that the Obamas were scrubbing their tweets over Clinton’s illegal email server because “Obama is implicated here and he’s pissed.” He added, “You know what his legacy might be? Jail.” However, the claim was just simply untrue.

The post remains up and unchanged on Gateway Pundit.

Previous CNN Guest Drops The Mic On Lewandowski: Listen, I’m Not Getting Paid By One Of The Candidates [VIDEO]
Next FLORIDA: Hillary +8 In New Survey Which Shows 28% Crossover From Early Voting Republicans [VIDEO]