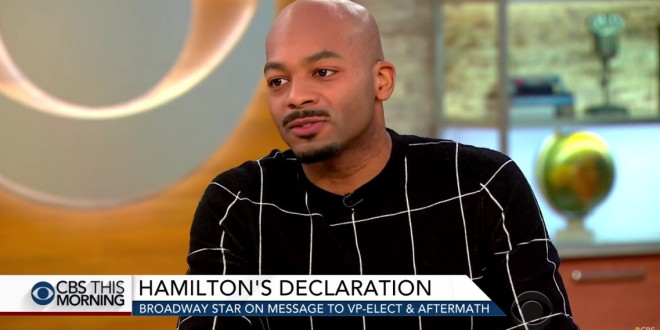 Hamilton Star Brandon Dixon: There’s Nothing To Apologize For, Conversation Is Not Harassment [VIDEO]

An actor from the hit Broadway musical “Hamilton” who angered Donald Trump when he appealed on-stage for Vice President-elect Mike Pence to ensure the incoming administration respected all Americans said on Monday he would not apologize for the remarks.

President-elect Trump has complained several times about the comments delivered on behalf of the cast by actor Brandon Victor Dixon when Pence attended the show on Friday evening. In a series of weekend Twitter messages, Trump accused the cast of “terrible behavior,” said they had “harassed” Pence and demanded that they apologize.

Pence himself said on Sunday he was not offended, and declined to ask for an apology. Dixon, who played America’s third vice president, Aaron Burr, in the show, told CBS’s “This Morning” program there was no need for the cast to apologize.

Dixon defended the cast statement on Monday, saying the actors wanted “to stand up and spread a message of love and unity” following the bitterly divisive election campaign that culminated in Trump’s surprise win on Nov. 8. “There’s nothing to apologize for,” Dixon told CBS. “Conversation is not harassment.”

The Left: We will publicly shame all those who oppose us – and don't you dare try to defend yourself.

I doubt @GovPenceIN is concerned about the opinion of preening snowflakes on a Broadway stage who earn a living playing make-believe.