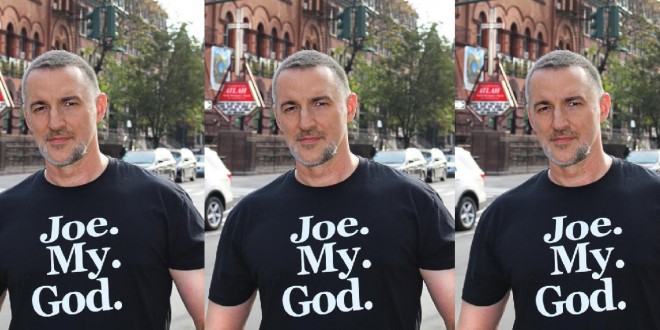 From Joe: Beloved readers, on this Thanksgiving Day, as on every other day of the year, uncountable LGBT kids are living on the streets, turned out by the very people who are supposed to love them. As we do every Thanksgiving, today we turn JMG over to Ali Forney Center founder Carl Siciliano. Please click and read his message below….

At the Ali Forney Center we see the destructive power of hate every day.

We see how hate hurts LGBT youths, how hate makes them unsafe in their own homes. In recent years more of the young people coming to us talk of the psychological torture they endured in bible camps and conversion therapy, aimed at “curing” them. When they don’t get cured they get kicked out. It is heartbreaking to have your parents show you that, in their eyes, being LGBT makes you unworthy of being loved.

We see the brutal evidence of hate in the stark reality of LGBT children who show up at our doors. Driven from their homes, cast out to the streets far before they have the means and ability to provide for themselves. It is hard to see young people cold and hungry, and afraid for their survival. Hard to see them carrying their belongings in suitcases or garbage bags as they sleep in subways or parks.

Last year we saw more need than ever before; more than twelve hundred young people came to us for help. And this during the final year of Obama’s presidency. What will happen with Trump as president? Now that the forces of hate have been so emboldened across our country how many more LGBT children will be unsafe? How many more parents will be infected with hatred?

And what will happen to the federal funding we rely on to house and provide for our kids? During Bush’s presidency, LGBT youth organizations struggled. The religious conservatives in the Bush’s administration took the taxes of LGBT people, but were unwilling to use federal funds to meet the needs of our most vulnerable youths. I saw that as a form of tyranny. Given the virulent homophobes Trump is putting on his transition team and cabinet, we have to prepare for more of the same.

But I cling to hope.

I have hope because of the goodness, compassion and strength of our community.  I saw this expressed magnificently when we launched our campaign to win the ATLAH church site, when it was foreclosed and scheduled to be sold at auction. In three weeks we raised $330K towards that effort. The JoeMyGod community was at the front lines of this campaign, much of the $100K  we received in the first days came directly from Joe’s readers. I was so moved that you fought back against Pastor Manning’s messages of hatred and violence by helping our vulnerable young people.

(Alas, the foreclosure will remain tied up in court for months, as ATLAH argues they should be exempt from the decades of unpaid water bills which resulted in the foreclosure. We expect that whoever loses the legal decision will appeal. However, we are hopeful that NYC will finally win in appeals court, allowing the auction to proceed. The complexities of this case are more than I can describe here, so I recommend this examination of the case in the New York Times. We are holding the donated funds in reserve, should the auction proceed. But no matter the legal outcome, we have raised enough to obtain a mortgage to purchase a new home for our young people, at ATLAH or elsewhere, thanks to our community’s extraordinary compassion and generosity.)

And I have hope because of the young people in our care. Most have endured things in their young lives that nobody should endure, cruelties that could easily have crushed them. But they still have hope. I was overwhelmed by this last week. Our Board members hosted a career pathways event for the youths in our job training program, where volunteers came together to tell our youths about their career paths, and about their experiences as LGBT adults in different industries. Looking at the joy and hope that our young people brought to the event, at their determination to rise above their harsh circumstances, I felt I was taking a master class in human resilience. They are my heroes and I will not allow myself to be less hopeful than they are.

I thank the JoeMyGod community for standing by the Ali Forney Center in good times and in hard times. I feel like all of you are our kids’ guardian angels, in gruff disguise. I thank each of you for all that you have done for us, and hope that you will continue to support us as we enter this unusually frightening holiday season.

Donations can be made online at via credit card or PayPal.

Or can be mailed to:

For information about our audited financials and how our donations are spent, go here.

I thank each of you again, and I wish you a wonderful Thanksgiving.