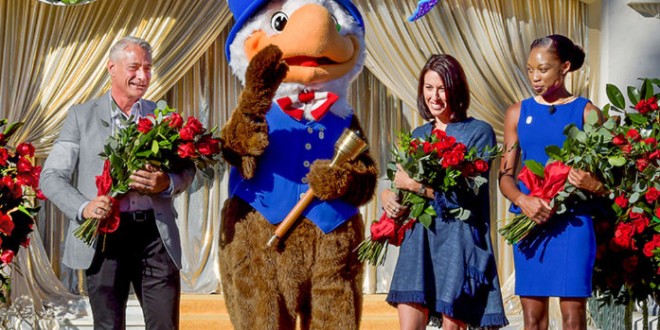 In between the excitement of being chosen as a Grand Marshal for the 128th Rose Parade Tuesday, Greg Louganis didn’t think stop to think that he could be the first openly gay person to be given the honor. “I hope it inspires people,” said Louganis, “and that they know they are loved.”

The Tournament of Roses did not respond to requests for comment about whether Louganis is the first. A review of the list of past Grand Marshals would indicate that he is. Louganis is considered the greatest American male Olympic diver of all time, having competed in the 1976 games in Montreal, the 1984 games in Los Angeles and the 1988 games in Seoul.

Winning five total medals, including four gold, he’s the first man to sweep both diving categories in consecutive Olympics. Louganis came out publicly as gay in 1995.

RELATED: The 2014 parade featured a same-sex wedding on a float sponsored by the AIDS Healthcare Foundation, resulting in widespread screaming and wailing from anti-gay and religious hate groups. The American Family Association issued a call for Christians not to watch “this in-your-face promotion of homosexuality” which “hijacks a traditionally family-friendly event.” Save California launched a boycott campaign of the parade’s sponsors and called on Christians to wave anti-gay signs and boo the “outrageous” float as it passed. Pastor Kevin Swanson (of more recent Ted Cruz infamy) suggested that Christians should sponsor their own float which depicts homosexuals being stoned to death. That day the float was awarded the Rose Parade’s “Color Harmony” prize.