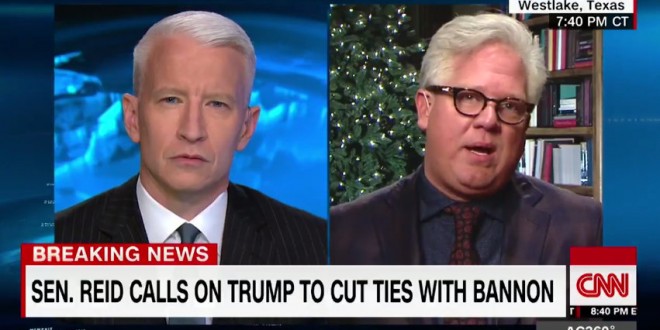 Beck: The Alt-Right Is Real And Terrifying [VIDEO]

Nationally syndicated radio host Glenn Beck said Tuesday that the alt-right movement is “truly terrifying,” adding that while leading Breitbart News, Stephen Bannon gave a voice to white nationalists. “He has given a voice and power to that group of people,” Beck told Anderson Cooper on “AC360.” “You don’t empower people like that. You just don’t. It’s not smart.”

The alt-right movement has been accused of white nationalism, racism, misogyny and anti-Semitism. In July, Bannon told Mother Jones that his site had become “the platform for the alt-right.” Beck refused to say whether Donald Trump should rescind Bannon’s appointment as the chief strategist and senior counselor within his administration.

“We have to have a discussion aside from politics about this small group of people and how this European and really pro-Russian nationalism is seeping into our country,” Beck said. Beck believes the majority of Trump voters are not part of the alt-right movement, but says “they are being influenced without knowing it.”

Previous Trump Melts Down Over Transition Reports
Next Perkins: Boycott Pepsi Because Their CEO Fears Trump