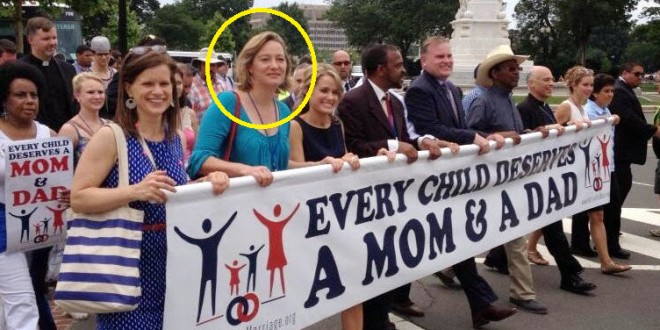 A French court has ruled it a criminal offense to call somebody a homophobe. Laure Pora, the former head of Paris ACT UP, has been fined $2500 for using the word on a poster of La Manif Pour Tous president Ludovine Rochere, seen above marching in NOM’s 2014 hate parade in Washington DC. Gay Star News reports:

In 2013, ACT UP staged a protest against the pro-life Jerome Lejeune Foundation, which provides ‘research, care, and advocacy for people with genetic intellectual disabilities’. It was staged because the foundation supports La Manif Pour Tous and employed the organization’s founder, Ludovine La Rochère.

As part of the protest, activists threw condoms filled with fake blood against the wall and put up posters showing the logo of La Manif Pour Tous as well as pictures of La Rochère. Some of the posters had the word homophobe brandished across them.

As I reported extensively during France’s battle for marriage equality, La Manif Pour Tous staged many large and often violent anti-gay rallies with the support of the neo-Nazi National Front Party. Last month the group drew tens of thousands at a Paris rally for the repeal of same-sex marriage after next year’s presidential election.

RELATED: Today’s ruling in France somewhat echoes the incident in Ireland which vaulted activist/drag queen Panti Bliss to international acclaim and arguably aided Ireland’s successful campaign for same-sex marriage. After Panti called out homophobia among some Irish journalists during an appearance on a nationally televised talk show, Ireland’s public broadcaster issued an apology and paid nearly $100,000 to the journalists she had named. The payment ignited widespread furor and highlighted the marriage battle worldwide.