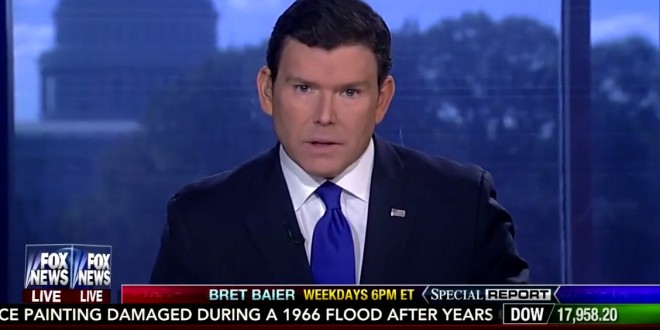 Yesterday’s apology was widely criticized as self-serving so he tried again today. Via Mediaite:

Fox’s Bret Baier apologized Friday for his damning reports about the FBI’s investigations into Hillary Clinton, namely his reporting that an indictment in the Clinton Foundation probe was in the works and that her server had been breached by foreign intelligence multiple times.

“Barring some obstruction in some way, they believe they [the investigations] will continue to likely an indictment,” he told Brit Hume. On Thursday morning he clarified that asserting an imminent “indictment” was “inartfully” phrased.

“That just wasn’t ‘inartful.’ It was a mistake, and for that I’m sorry,” Baier told Fox’s Jon Scott on Friday. “I should have said, ‘They will continue to build their case.’ Indictment obviously is a very loaded word, Jon, especially in this atmosphere.” He clarified that prosecutors, not FBI investigators, make the decision whether or not to pursue an indictment based on the evidence.