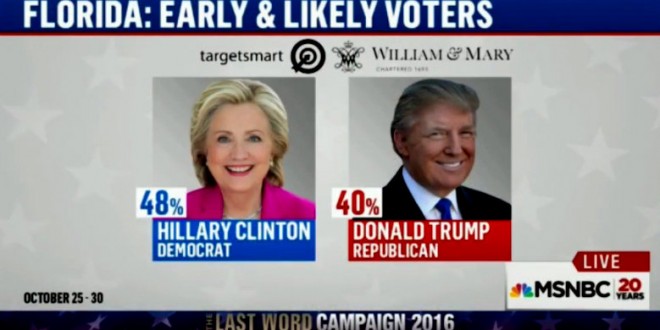 Democrat Hillary Clinton enjoys an eight-point lead over Donald Trump in Florida, a key presidential battleground, according to a new survey, and that’s due in no small part to significant crossover support from 28 percent of early voting Republicans.

The poll, by TargetSmart, a political data firm, and the College of William and Mary, was first reported Tuesday night on MSNBC’s The Last Word with Lawrence O’Donnell. It will be released Wednesday.

TargetSmart CEO Tom Bonier said on the show that its tracking survey of early voters in Florida, combined with its projections for likely voters, found that Clinton led Republican nominee Trump in the state, 48-40 percent. He said 28 percent of early voting Republicans cast ballots for her, while just six percent of Democrats who voted early sided with Trump.

Important caveat: Some of the survey was conducted before the FBI letter.