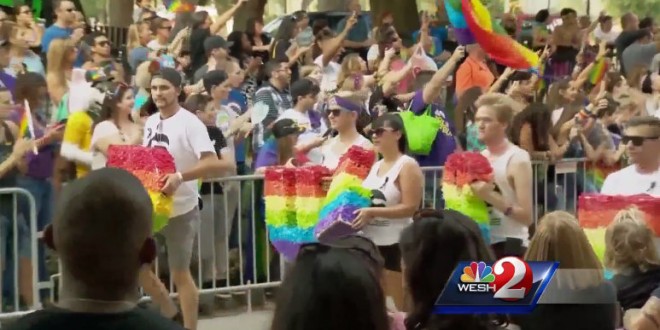 More than 150,000 people gathered in downtown Orlando Saturday for the 12th annual Come Out with Pride festival, the first since the Pulse nightclub massacre five months ago. The event, which celebrates the LGBTQ+ community, began at noon and featured an afternoon parade through Thornton Park.

Pulse employees and relatives of the slain served as parade marshals. And the procession also honored police officers, firefighters, paramedics and hospital workers who responded to the shooting. For many, the event was another step in the healing process for a community that’s still reeling from the terror attack.

“I’m sure, for me, there will be some tears, because it was here,” Melissa Cortez said. It was Nancy Torres’ first time attending the event. Torres sold Pulse T-shirts at the festival to help support her son, who worked at the club.

“They’re good kids,” she said. “They just have fun. They love each other. It was always a nice place to go.” Torres’ son and his former co-workers were among those honored on one of the parade’s first floats.

More from the Orlando Sentinel:

Parade participation was up nearly 33 percent with 147 groups scheduled to walk, up from 111 last year. Elaborate floats, draped in every color of the rainbow, made their way around Lake Eola Park and downtown Orlando Saturday afternoon spreading a message of acceptance, just hours after the Veterans Day parade filled the streets and less than 24 hours after an anti-Donald Trump march.

Family members of those who died in the attack walked near the front of the parade, trailing behind Community Grand Marshals: the Orlando Police Department and Chief John Mina; the Orlando Fire Department; Orange County Mayor Teresa Jacobs, Orlando Mayor Buddy Dyer and Orlando Commissioner Patty Sheehan; and the Pulse Float with employees and family members.

Each carried photos of their loved one or waved a white fabric angel overheard that honored the deceased. Names of the 49 were memorialized in bright marker, eliciting thunderous applause and tears from parade onlookers.

Sandwiched in the middle of fanciful costumes and bejeweled bustiers were three groups that stood out for a different reason: their cry for stronger gun laws to ensure another Pulse-like attack doesn’t happen.

“It’s absolutely devastating to me that we can just sit here and keep watching these things happen and do nothing,” said Andrea Halperin, with Moms Demand Action for Gun Sense in America. “We can’t prevent everything from happening, but we certainly can stop a lot of these tragedies.”

#Florida Moms are out @OrlandoPride. We stand with the victims of gun violence. #ComeOutWithPride @MomsDemand pic.twitter.com/NsmtXIa5p7

Our team sending love and solidarity across the Atlantic for @OrlandoPride today. #LoveWins #OrlandoPride pic.twitter.com/b5vufg3717

OPD #Pulse car will be leading the @OrlandoPride parade today & @ChiefJohnMina is one of the grand marshalls pic.twitter.com/v97rs7Gq2X

More video from a beautiful show if support and amazing turnout at @OrlandoPride. pic.twitter.com/JFkHESmbba