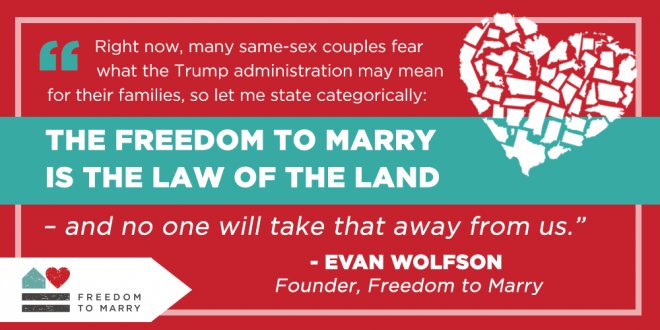 Evan Wolfson On Trump: Freedom To Marry Is The Law Of The Land And No One Is Taking That Away From Us

From Evan Wolfson, founder of Freedom To Marry:

The election was a catastrophe and much of what we all care about and have worked for, our country, and even the world are in real danger.

Like pretty much everyone I heard or know, I was wrong about how it would go, so it’s okay to take a moment for some understandable grieving, and some humility. But it’s also a time to reach for clear-sightedness about what is good and remains good, belief in what is possible, and regrouping and recommitting to the work ahead to secure the world we want.

We don’t know the full contours of what we will face, we don’t have easy answers, we don’t immediately know the pathway – but we still have our lives, our luck, our voices, our hearts, our inheritance, our loved ones, and many others who share our hopes and values.

This is still the country that elected one of our finest presidents, the first African-American to be elected president – not once, but twice.

This is still the country in which a despised and oppressed minority could believe, organize, work, change hearts and minds and then the law, and win the freedom to marry.

And it is still the country where the majority of voters sought to elect a woman as president. Even the minority of voters who chose Trump are not all the same, nor did they all vote for the same things.

What happened was bad enough. Let’s not paralyze ourselves or empower our opponents by making it worse than it is.

Right now, many same-sex couples fear what the Trump administration may mean for their families, so let me state categorically: The freedom to marry is the law of the land – and no one will take that away from us.

Those who have gotten married, and those who get married, will remain married, and no one will set them asunder. The Williams Institute reports that more than 1 million gay people have married in the United States. There is no action the incoming administration could take, even if they wanted to, that would undo the thousands of marriages lawfully celebrated in all 50 states. Nor is there any threat to marriage laws in states where we secured the freedom to marry through the legislature or at the ballot box.

No act of Congress or presidential fiat – even if they wanted to – could overturn the Supreme Court ruling that affirmed the freedom to marry nationwide. Supreme Court justices do not lightly overturn precedents, and it is even very unlikely for the question to come before the Court; courts don’t just issue opinions, they rule on cases properly brought.

And, of course, we won in the courts of law because we won first, through hard work and engagement, in the court of public opinion. A super-majority of Americans support the freedom to marry. That has not changed.

This doesn’t mean we need not be vigilant, or can retreat into complacency. Marriage is important – and is here to stay – and is still a powerful vocabulary for building empathy and support to be harnessed to the other fronts on which we fight. Yes, winning marriage was important – but engagement is key. We must all stay engaged.

There are, as always, challenges ahead, and what looms before us is uncertain and big. But our movement and our country have met and overcome challenges before.

We won because we marshaled the three key elements of success: Hope, Clarity, and Tenacity. No doubt tenacity will be needed; we have a long road ahead. Right now, we may not have full clarity, but we will get there again soon as the new landscape takes shape. And we must start with, and convey, hope. We must move from reeling to rallying.

We will get through this. We must – for our country, for our community, for those we love and all we believe in. As the song goes, “Twilight descends, everything ends…’til tomorrow, tomorrow.”

Freedom To Marry held a “going out of business” party and disbanded several months after the Obergefell ruling.

They’re back..group that said it would “fold up shop” after Supreme Court robbed voters of their say on marriage. https://t.co/6TqSfhAcGf

Previous Facebook Glitch Tells Users They Have Died
Next Pam Bondi: I’m Honored To Serve The Man I Refused To Prosecute After He Donated $25,000 To My Campaign