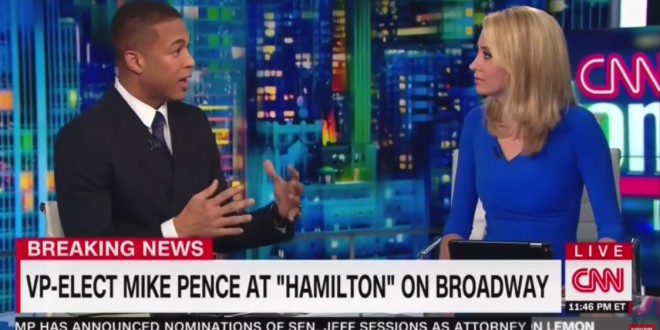 After panelist Angela Rye reminded McEnany that the show’s new lead is an openly HIV-positive gay man, the Trump advocate attacked the “Hollywood elite, the media elite, the political elite” that she feels have disrespected President-elect Donald Trump.

“Can you imagine how that feels when Mike Pence, who has rallied and railed against gay people, and tried to shoot down and block gay legislation?” Lemon said before addressing the plea made to Pence “He’s saying, ‘I’m giving you a chance to give me a chance.’”

Previous REPORT: Breitbart May Be Forced To Reveal Secretive Investors Before Gaining Capitol Hill Press Credentials
Next TEXAS: Federal Judge Tells New Citizens That If They Don’t Like Trump They Need To Find Another Country