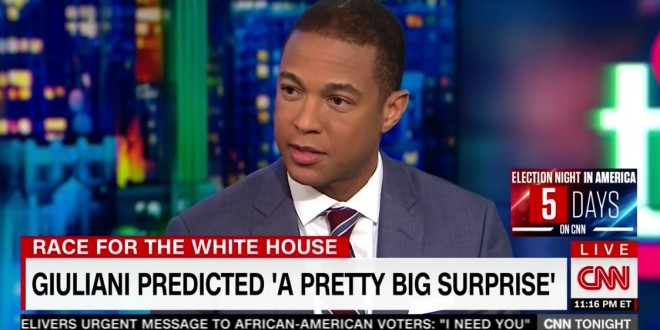 Mr. Mayor has been going to bat for his longtime pal Donald Trump in just about every conceivable media arena, and recently seemed to slip in a bit of surprising information to Martha MacCallum of Fox News. At the conclusion of an interview on October 26 about the presidential election, Giuliani (while speaking about FBI Director Jim Comey) said, “I think he’s got a surprise or two you’re going to hear about in the next two days. I’m talking about some pretty big surprises.” When MacCallum prompted the Mayor for follow-up, he coyly continued, “You’ll see.”

It’s an admission of familiarity with the FBI proceedings that CNN’s Don Lemon spotted and called out during his Thursday night broadcast. That interview on Fox News was just two days before Comey wrote a letter to lawmakers informing them of his decision to reopen the investigation in Hillary Clinton‘s use of a private email server, a bombshell development just eleven days before the election.

“I saw something, and when I saw it, it caught my attention,” Lemon said to Michael Moore of the prescient clip. After the clip rolled, Moore seemed to agree. “It sure sounds like he knew something. This man is a former federal prosecutor, worked for the Justice Department, that if somebody slipped him some information there, that is amazing.”