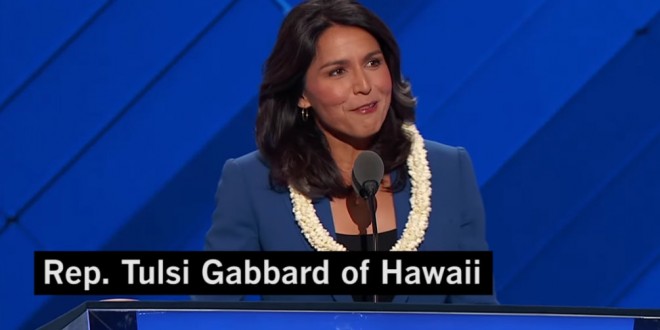 Hawaii Democratic Rep. Tulsi Gabbard is meeting with President-elect Donald Trump and his transition team Monday for a possible top job in the new administration, a source said. Gabbard, who backed Vermont Sen. Bernie Sanders in the Democratic primary, is being considered for jobs at the Defense Department, State Department and the United Nations, the source said.

Gabbard stepped down from her post as a vice chairwoman of the Democratic National Committee earlier in the year to support Sanders — and fight Hillary Clinton — in the primaries. She stood by Sanders through the Democratic convention, only announcing she would vote for Clinton days after the convention ended.

f Trump picks Gabbard or Rhee for his administration, it would mark an about-face for the incoming president, who promised in October that Democrats would not serve in his Cabinet. Also expected to meet with Trump today at Trump Tower are former Texas Governor Rick Perry, Oklahoma Governor Mary Fallin, former Labor Secretary Elaine Chao and Newt Gingrich.

Gabbard delivered the nominating speech for Sanders at the Democratic convention and was listed as his running mate as a write-in candidate on California’s ballot. She is the only Hindu ever elected to Congress.