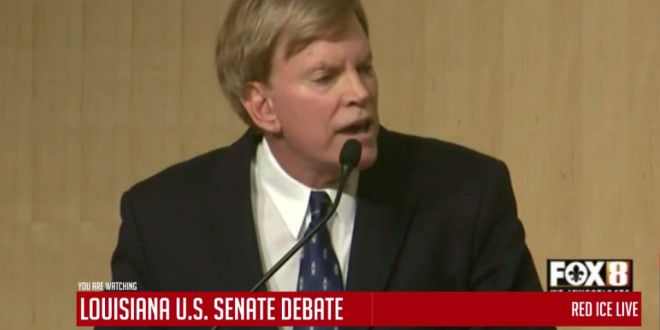 Duke invoked Trump’s name early and often during the debate, and compared himself to the GOP nominee while complaining that he is unfairly criticized for his controversial views. “I will be Donald Trump’s most loyal advocate,” Duke said.

Trump has repeatedly disavowed Duke’s support and, more recently, that of a KKK publication that endorsed him this week. The debate quickly went off the rails when Duke got into an extended shouting match with the moderator.

In defending some unsavory remarks about Jews, Duke said “I’m not opposed to all Jews … there is a problem in America with a very strong, powerful, tribal group that dominates our media and dominates our international banking.”

He also accused such groups of controlling the reins of American foreign policy, citing the civil war in Syria while attempting to draw parallels between those groups and Democratic presidential nominee Hillary Clinton. “The lady should be getting the electric chair, being charged with treason,” Duke said.