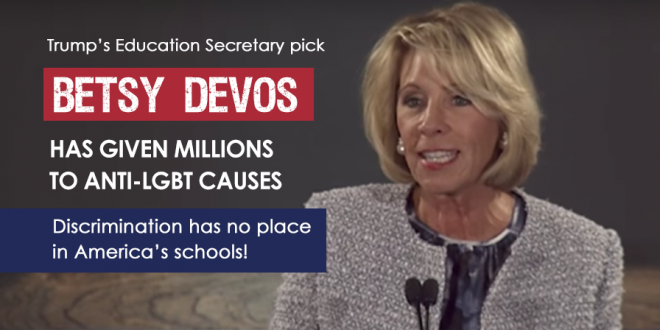 From the LGBT rights group Freedom For All Americans:

The Michigan billionaire is a troubling choice, given her extreme history of supporting anti-LGBT causes and opposing efforts to bring fairness and equality to LGBT Americans. Between 2010 and 2013, the DeVos family and their various foundations have given millions of dollars to anti-LGBT groups, including Focus on the Family, Family Research Council and the Alliance Defending Freedom.

Each of these organizations has fought vehemently against protecting LGBT students from discrimination and harassment. They have also lobbied for legislation to prohibit students from using the restroom that matches their gender identity; opposed rights for same sex parents; and are fighting to require education professionals – including teachers, counselors, therapists, administration and more – to out LGBT students to their parents, even if they are not ready.

DeVos, her family, and their foundations were seen as leaders in the push to ban marriage between loving, committed same-sex couples in Michigan and California. She has also given more than half a million dollars to the National Organization for Marriage, a group that worked for years to block marriage between same-sex couples and now has made its mission clear to roll back the freedom to marry.