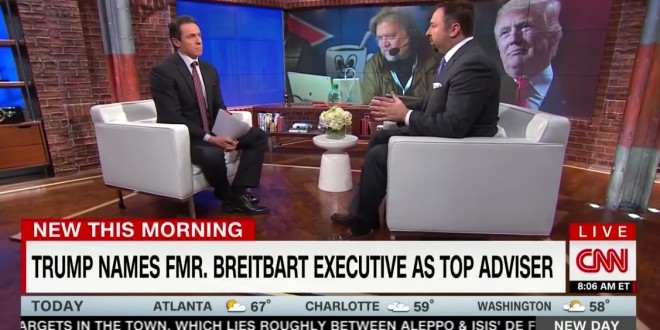 Miller attempted to parrot the new message from the Trump transition, claiming that he’s beyond attacking Mexicans, Muslims, women and all of the other groups targeted during the election. Instead, they want to move forward and bring the country together. “New Day” host Chris Cuomo couldn’t understand how that was possible with Bannon as Trump’s right-hand man.

Miller was bothered Cuomo would bring up something so divisive. “Again, I think that your focus on trying to divide people…”

Cuomo cut him off, “Not fair, Jason. Not fair. You put Bannon in position. Not me. I don’t put out the headlines on Breitbart. He does. He is seen as the architect of a very effective strategy that Donald Trump used during the election, which you guys now say needs to be left behind. But you’re bringing the architect of it with you. That’s not on me.”

Previous Gingrich: Breitbart CEO Steve Bannon Can’t Be Blamed For His Site’s Racism And Anti-Semitism [VIDEO]
Next Lunatic Alex Jones: Trump Called To Personally Thank InfoWars For “Standing Up For The Republic” [VIDEO]