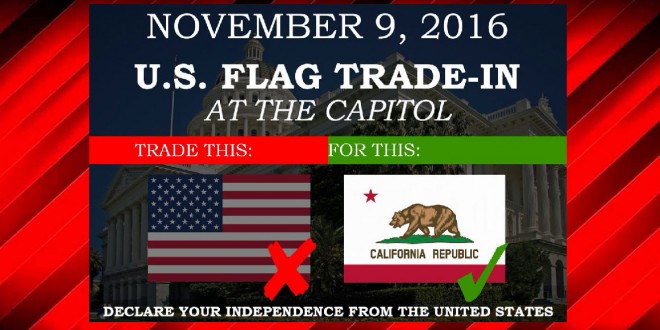 “Calexit” is swiftly taking over social media. After Donald Trump won the race to the White House, people across California took to social media Tuesday night to call for “Calexit” — California exit — recalling Brexit, Britain’s push to leave the European Union. As the topic continues to trend on Twitter, Californians in favor of seceding from the US will gather today on the steps of the capitol in Sacramento.

The group leading the charge, Yes California Independence Campaign, assembled long before Trump’s surprising victory. Its aim is to hold a referendum in 2019 that, if passed, would make California an independent country.

The movement has racked up an impressive backer already. Shervin Pishevar, an early investor in Uber and well-known angel investor, said on Twitter that he would bankroll a campaign to make California its own nation if Trump won.

In an interview with CNBC on Wednesday, he confirmed his mission. “It’s the most patriotic thing I can do,” he told CNBC. “The country is at serious crossroads. … Calling it New California.” He expressed a desire that California, the sixth-largest economy in the world in terms of GDP, might become a catalyst for a “national dialogue” as the country reaches a “tipping point.”

Yes California is headed by Louis Marinelli, whom longtime JMG readers might recall as the one-time bus driver for NOM. Marinelli made a lot of noise about his break from the hate group, denouncing Brian Brown and expressing regret for having opposed same-sex marriage.