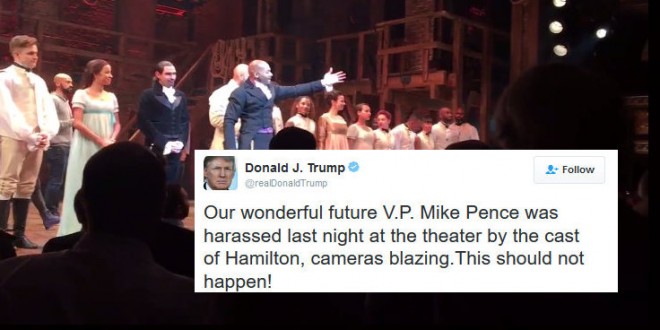 Vice-president elect Mike Pence made a surprise visit to watch the award-winning Broadway show Hamilton at the Richard Rodgers Theatre Friday night, and received a loud chorus of boos from the audience as he made way to his seat. At the conclusion of the show, cast members addressed Pence’s appearance — as a group locked in hand-to-hand — behind Brandon Victor Dixon who delivered the following message:

“Vice-president elect Mike Pence, we welcome you and truly thank you for joining us at Hamilton American Musical,” Dixon, who plays Aaron Burr, the nation’s third vice president, said. “We sir, we are the diverse America who are alarmed and anxious that your new administration will not protect us, our planet, our children, our parents, or defend us and uphold our alienable rights, sir. We truly hope that this show has inspired you to uphold our American values and to work on behalf of all of us,” Dixon added. “We truly thank you for sharing this show, this wonderful American story told by a diverse group of men, women of different colors, creeds and orientation,” Dixon concluded to a roaring applause by those in attendance.

Saturday morning, Donald Trump said the cast’s comments were harassment in a tweet and “This should not happen!” followed by another tweet asking the cast to apologize. Dixon, who delivered the comments, replied saying the “conversation is not harassment sir. And I appreciate @mike_pence for stopping to listen.”

Tonight, VP-Elect Mike Pence attended #HamiltonBway. After the show, @BrandonVDixon delivered the following statement on behalf of the show. pic.twitter.com/Jsg9Q1pMZs

The Theater must always be a safe and special place.The cast of Hamilton was very rude last night to a very good man, Mike Pence. Apologize!

Our wonderful future V.P. Mike Pence was harassed last night at the theater by the cast of Hamilton, cameras blazing.This should not happen!

Previous IT’S LIKE CHRISTMAS: Nazis Celebrate Trump’s Picks
Next Trump: I Only Settled Those Trump University Lawsuits Because I’m Too Busy Focusing On The Country