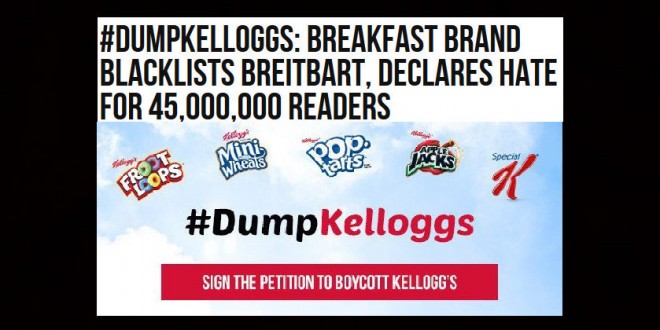 In a transparent attempt to bully their remaining advertisers and in keeping with their vow that they would “go to war” against any brands that drop them, this afternoon Breitbart launched a boycott of Kellogg’s. From their notice:

The decision by Kellogg’s, which makes Pringles, Eggo waffles, as well as Special K and Frosted Flakes cereals, among others, will make virtually no revenue impact on Breitbart.com. It does, however, represent an escalation in the war by leftist companies like Target and Allstate against conservative customers whose values propelled Donald Trump into the White House.

“We regularly work with our media-buying partners to ensure our ads do not appear on sites that aren’t aligned with our values as a company,” said Kellogg’s flak Kris Charles. “We recently reviewed the list of sites where our ads can be placed and decided to discontinue advertising on Breitbart.com. We are working to remove ads from that site.”

Kellogg’s offered no examples of how Breitbart’s 45 million monthly readers fail to align with the breakfast maker’s values. Indeed, the move appears to be one more example of an out-of-touch corporation embracing false left-wing narratives used to cynically smear the hard working Americans that populate this nation’s heartland.

Breitbart News Editor-in-Chief Alexander Marlow encouraged the boycott of Kellogg’s products, describing their war against Breitbart News as bigoted and anti-American: “Breitbart News is the largest platform for pro-family content anywhere on the Internet. We are fearless advocates for traditional American values, perhaps most important among them is freedom of speech, or our motto ‘more voices, not less.’ For Kellogg’s, an American brand, to blacklist Breitbart News in order to placate left-wing totalitarians is a disgraceful act of cowardice. They insult our incredibly diverse staff and spit in the face of our 45,000,000 highly engaged, highly perceptive, highly loyal readers, many of whom are Kellogg’s customers. Boycotting Breitbart News for presenting mainstream American ideas is an act of discrimination and intense prejudice. If you serve Kellogg’s products to your family, you are serving up bigotry at your breakfast table.”

Breitbart is promoting the boycott on social media with the hashtag “WAR.”

Previous Scott Brown: It’s No Secret That Massachusetts Voters Drove Up To New Hampshire To Vote There Too
Next AUSTRALIA: Teen Scientists Recreate Key Ingredient In Pharma Douche’s Drug For Pennies Per Dose