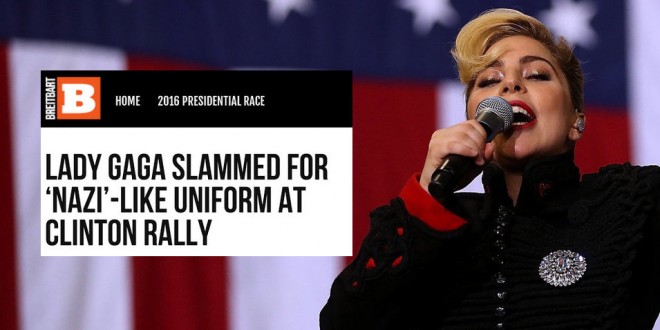 Pop star Lady Gaga was burned on social media late Monday, with fans furious that the singer “dressed literally like a Nazi” while speaking at Hillary Clinton’s final campaign rally. Gaga took the stage at a midnight rally in Raleigh, North Carolina for one final push to support Clinton heading into Election Day. But rallygoers and those watching at home apparently became distracted by the “Poker Face” singer’s bizarre outfit, which featured a red armband and high, buttoned-up collar that some social media users likened to a Nazi uniform.

As many have pointed out on Twitter, in 2012 Lady Gaga dropped a ton of money to buy 55 pieces of Michael Jackson memorabilia at an estate auction, including the jacket she wore last night.